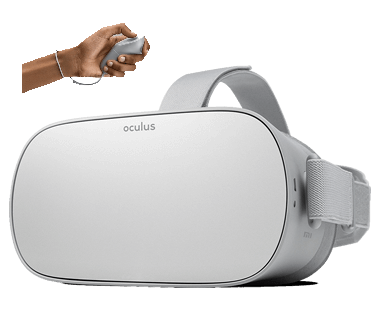 We make available an extensive stock of units through our VR hire service typically for companies and organisers looking to add a VR experience to their events of any type, be it a few or hundreds of devices. Simply send your request through the form at the end of this page specifying the number of devices you want to hire, the dates that you plan to use them and the Spanish city where you request them, and we’ll send you a personalised and competitive quote right away. Alternatively you can also send us an email or call using the information at the bottom of this page. The most common VR sets for use in events and companies are the Oculus Go, Oculus Rift, HTC Vive and Samsung Gear VR, all of which provide an extensive library of content available through their app stores like apps, 360 videos and video games, all being constantly updated in response to the very dynamic landscape of the VR headset industry in general, innovating in hardware and software. One of the main attractions of these products is their ability to fully immerse the user in a fantastic experience aided by the unbelievable 3D graphics and sound the headsets project. They have become a staple of marketing events in Madrid, Barcelona and the rest of the cities in Spain where every day companies are finding new ways to make better events by incorporating VR experiences.

Our VR hire product is being used in many different ways by organisers and companies from a growing, already wide range of business sectors that promote new products, games, aid in marketing actions, entertainment, engineering, pharma or cosmetics, aviation and construction, all because at its core, VR headsets are part of a technology platform that enables a new landscape of exciting experiences that are being made available every day.

This headset model from the Oculus brand of VR devices is designed with simplicity in mind: it’s one of the first that are fully autonomous, not requiring a PC or any other kind of external additional device like a Playstation gaming console, a Samsung, Xiaomi Android mobile or an iPhone in order to work; it comes with all the hardware included to project a complete 3D experience with sound (processing and graphics unit, sound and battery). The Oculus Go has an user-friendly interface and design that comes ready to access an extensive catalog of content that can be easily installed for use in your projects or activities. If you are thinking about an Oculus Go rental, please get in touch so we can guide you getting the best out of these sets.

Our smartphone rent service for Samsung products has been joined by this company’s virtual reality headsets, for our Samsung Gear VR hire service, making available to our customers a full stock of VR Samsung products and all the consulting on these vr headsets that you might require for your event.

When you rent Samsung Gear VR devices from us, a Samsung Galaxy smartphone is installed in the VR headset, becoming the screen of the vr experience and the sound source too. These hardware devices are made by Oculus for Samsung which enables a great experience for its entry-level price point (please contact us with any inquiry about these devices)

Today, Oculus is the top brand when it comes to the world of vr headsets and with this model it’s where it shines because of its technical achievements while working in tandem with a powerful PC with an advanced graphics card and processing power (brands like Razer, Alienware, MSi, Falcon Northwest, HP, Lenovo, Cyberpower, Acer and Asus are the most commonly used). Contact us if you need these devices and their PCs anywhere in Spain where you plan to bring virtual reality experiences, we carry a full stock when you are ready to rent Oculus Rift.

Belonging to the same range of powerful virtual reality devices, our rent HTC Vive headsets compete with the Oculus Rift for the most stunning experience, also requiring a high capacity PC to work, we in PADINTHECITY rent the whole package so you don't have to worry: the VR headset and its correct, powerful companion computer. There is plenty of content available for both the HTC Vive and the Oculus headsets and they can also be used with any compatible software or content that your company creates. Contact us for a quote when planing to rent HTC Vive devices for your event or business.

The most common virtual reality headsets and glasses rented for events are: Oculus Go, Oculus Quest, Samsung Gear VR, HTC Vive and Oculus Rift, each one in its own category and tech, they offer the best experience and stability for users in companies and events. In additional to the VR headsets above there’s also a healthy family of Augmented Reality (AR) and Mixed reality sets, bellow is a list of the main ones available:

Feel free to contact us anytime with any enquiry regarding a VR rental, we’ll be glad to help.

As part of our VR hire service we deliver and pickup back the devices for you at your preferred location in Spain in, for example, one of the two main cities for events, Madrid or Barcelona, but also everywhere in the country where events with virtual reality headsets are organised, cities like Sevilla, Valencia, Bilbao, Málaga, Burgos, Pamplona, Donostia, Vitoria, Oviedo, Santander, León, Alicante, Zaragoza, Badajoz, Gijón, Murcia, Cádiz and many others. We rent VR headsets for customers all over Spain.

We make available for rent a wide range of VR or Virtual Reality headsets (Realidad Virtual or RV in Spanish) for any kind and size of event with a simple process in which we requiere from you basic information of your use case, if there’s any specific VR headset that you have in mind (Oculus Go, Oculus Quest, Oculus Rift, Samsung Gear VR, HTC Vive, etc), the city in Spain where you require your VR rental (Madrid, Barcelona or any other city in the Iberian peninsula), the number of units and the dates you’ll need them. Contact us with this information by phone, email or using the form bellow and we will be glad to process your request as soon as possible.

Microsoft Corporation has been, for a few years now, making their way into the AR/VR industry with their HoloLens headset, standalone glasses that have an embedded Windows operating system, battery, memory and graphics processor, meaning that they don't need any external hardware or accessories in order to run, giving the user complete freedom of movement for a great Augmented Reality experience that presents a digital projection over the real world, mixing the user’s surroundings (tables, chairs, a room, a street or a landscape) with 3D graphics and animation that overlaps reality creating a “Mixed reality” experience. Please check with us for availability when planning to your HoloLens hire.

This is the third major model for Oculus after their Oculus Go and Oculus Rift headsets, and they fill a new category in the middle of those two with a more powerful but standalone version than the Oculus Go, they include everything in the same package: battery, an advanced graphics processor, sound playback, storage memory and WiFi connectivity, giving the user a full immersive 3D experience with freedom of movement that is available to companies and events through our Oculus Quest hire service.

These are the new glasses from VIVE, a product looking for a place in the standalone market that incorporates a great innovation with its foldable frontal that allows users to disconnect for a moment from the virtual reality by simply folding up the frontal part of the headset. They free then their eyes to get into the “real world” again quickly and folding them down, the 3D experience resumes where you left. The company has made a great job at designing everything in this headsets using breathable materials, a lightweight specification and a better grip to your head; graphics-wise, according to the manufacturer is described with incredible 3D pictures, real sound, ergonomic and precise controls and a very easy setup and management. Please contact us if you want to hire Vive Cosmos sets.

This device competes directly with Microsoft HoloLens in the Augmented/Mixed Reality range of products by bringing a three part paradigm design consisting of the “Lightwear” headset, a “Lightpack” mini computer and a wireless controller with touchpad technology, buttons and vibration. The Magic Leap One devices have a very limited production imposed by the manufacturer for now making them usually available to developers that are mixing with them the real and the augmented worlds by combining physical and computer generated artifacts. We’ll be glad to help you rent the Magic Leap headsets, please write or call so we can inform you of the availability and pricing of these AR headsets.

These are terms used frequently when talking about VR or AR headsets/glasses in a generic way, but however the media or people call them Virtual glasses, 3D glasses of Virtual Reality glasses, the most popular and interesting devices for events and companies are: Oculus Go (for its easy to use and the freedom to move you get from a cordless device that integrates battery, processing, etc., in a standalone whole), Oculus Rift (with sensors that track the user’s location in the room they generate and incredible experience using a powerful companion PC and lots of incredible content and apps), HTC Vive and Vive Pro (thanks to their advanced graphics and location tracking these are one of the favourites to produce amazing interactive experiences).

Our clients usually inquire about these other products when they ask about our VR hire: